LIVING IN SPLITSVILLE: Passing for an Intact Family 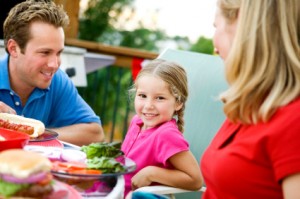 Last Thursday was my younger daughter’s birthday, so the four of us went out for dinner to celebrate.

The four of us means R was there.

We’ve done this before, of course–re-enacted scenes from our former life as an intact family. We’ve done it on Christmas morning (twice) and on the girls’ birthdays.

I realize it’s good that we can pull off the amicable thing. I sense how happy it makes the girls to have both of their parents in the same room. According to Constance Ahrons’ rubric in The Good Divorce, R& I are “Cooperative Colleagues.” She defines five types of divorcing couples, ranging from “Perfect Pals” (i.e. such good buddies that they should just stay together) to “Dissolved Duos” (think icky, mean Hollywood-style splits). Says Ahrons: “Cooperative Colleagues don’t consider each other close friends, but for the most part cooperate quite well around issues that concern the children … They spend occasional time together–usually special occasions, such as birthdays, school plays, or parent-teacher conferences.”

As sad and second rate as it is, I take pride in the fact that we effortlessly deceive restaurant staff into thinking we’re just another intact family, one where the parents don’t regularly meet in a mediator’s office. We leave the restaurant and walk together down the street, with the youngest daughter up on Daddy’s shoulders. We totally pass.

I find these times of temporary togetherness both grounding and unsettling. On the one hand, I’ve so adapted to my single-mom role with the girls that when R joins us I feel vaguely intruded upon–like, who is this guy who thinks he knows my kids so well that he can tell them what to do as if he’s their parent or something? But it’s also such a gift, one that I took for granted during all those years when the-four-of-us was a given. Another parent? Seriously? Someone who understands these two children–their dynamics, their strengths and weaknesses, their histories, their everything–exactly as I do? Someone around whom I can let down my guard a bit, as if I’m not the only one in charge? It almost sounds too good to be true.

When R showed up at the restaurant the other day, part of me wanted to say: “What are you doing here?” while another part wanted to shout: “Well, it’s about time you showed up! Where the @#$%^&* have you been for the past 20 months?”

But, being that we’re so amicable, and that it was our daughter’s birthday, I simply said “Hi.” Then we ordered sushi.