REEL LIFE WITH JANE: Alice in Wonderland in 3D 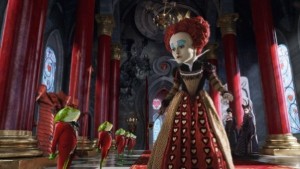 SYNOPSIS: Nineteen-year-old Alice returns to the magical world from her childhood adventure, where she reunites with old friends and learns of her true destiny: to end the Red Queen’s reign of terror.

Sex/Nudity: The Red Queen has a thing for the Knave of Hearts. Alice dances with Hamish, and he proposes to her. Alice catches her brother-in-law kissing a woman who’s not his wife. The Knave of Hearts pushes Alice against a wall, claiming he likes her “largeness.”

Violence/Gore:The Red Queen is pretty intense, frequently sentencing people to death and yelling, “Off with their heads!” A scary creature called the Bandersnatch chases others and scratches Alice. A moat is filled with cut-off heads, and magical potions include severed fingers. An executioner lowers an axe on someone, and a creature is decapitated.

Which Kids Will Like It?Kids ten and older who are familiar with the classic tale by Lewis Carroll, who like fantasy tales, or like Johnny Depp/Tim Burton films.

Will Parents Like It? It’s pretty intense for a PG movie, and the story meanders a bit. There are also several scenes that venture towards a PG-13 rating, not to mention Alice drinking and eating mysterious beverages and foods that make her larger or smaller.

REVIEW: “Alice in Wonderland” is both a remake and a sequel of sorts. It finds 19-year-old Alice (Mia Wasikowska) returning to the fantasy underworld that she visited as a child. Only she thinks it’s all a dream, and doesn’t understand when the characters down there keep saying she’s “back.”

But first, let’s talk about how she got there. The story opens with Alice being driven in a horse-drawn carriage to what we (and she, apparently) soon learn is to be her engagement party. Hamish (Leo Bill) seems like the perfect catch for that particular era – he’s a lord, he has money, and the marriage would free Alice’s mother of being responsible for her into adulthood. That’s the way things went back then. You didn’t necessarily marry for love in the 19th century.

But Alice isn’t so sure about all of this. Her father was a wealthy man and entrepreneur who planned to explore profitable shipping routes throughout the world. Alice has that same independent spirit, which is why she feels trapped in this restricted world.

Cue the white rabbit wearing the waistcoat. Alice sees him in the bushes, and ditches Hamish during his proposal (with the expectant crowd looking on) to run off and find the rabbit (voiced by Michael Sheen). She falls down the rabbit hole and enters a world both strange and wonderful.

The movie is an interesting mix of real people, CG-enhanced people (the Red Queen has Carter’s face, but her enormous head and tiny body are computer-generated), and CG-animated creatures, like the Tweedles and the Cheshire Cat. You’re sort of scratching your head as to how it all came together, but I’m sure they’ll explain the process in a bonus feature when the DVD comes out.

The movie is available in both 3D and traditional formats. I saw the 3D format, and kept taking my glasses off to see what was 3D – because a lot of it didn’t really seem 3D-ish (though parts of it definitely were). I’d like to see the traditional format and see if there really is much difference.

As for the story, it sort of meanders along in a dream-like state and lags a bit somewhere around the time that Alice ends up at the Red Queen’s palace (about half-way through the movie). Mia Wasikowska is a beautiful girl who plays Alice with equal parts skepticism, wonder and annoyance. But she’s a little boring. I’d have to say that Anne Hathaway as the White Queen falls into the category, too.

The bright spot is Johnny Depp and Helena Bonham Carter, who’ve collaborated so many times with Tim Burton that they can probably read each others’ thoughts. They’re interesting and fun, not to mention quite colorful. Every time those two are onscreen, you can’t help but watch.

‘Alice in Wonderland’ is an interesting movie, though I wouldn’t call it fantastic. But I love the ultimate message – that Alice doesn’t have to marry for any other reason than love, and can boldly venture off to do her own thing, despite what others think about it. That’s a good message, not only in the 19th century, but also present day.

Jane Louise Boursaw is a freelance journalist specializing in the movie and television industries. Visit her online at FilmGecko.com, ReelLifeWithJane.com or email jboursaw@charter.net.