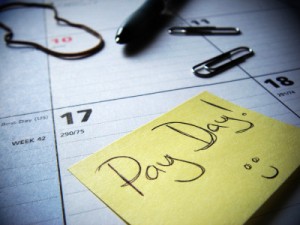 I am so clueless when it comes to understanding the many machinations of money (yet admirable for almost always being able to alliterate?)

During the last couple of sessions with my ex and our mediator, money’s what we talked about –proving that, as with so many things in life, divorce ultimately comes down to cash: where it used to come from, where it will come from, who owns what, who owes what to whom, and who bought the girls their last pair of snow boots. (I did.)

My understanding of money has always been very basic (i.e. you earn it, you spend it, you need it), and being married to R enabled that blissful ignorance. From the moment we moved in together on my 27th birthday, financial matters were his responsibility. I was elated when we got our first joint checking account that year, partially because I felt so grown up and also because –honestly?– it felt comforting to have a man’s name on those checks. In fact, R’s name was printed above mine even though both of my initials precede his in the alphabet. I’m not sure how that happened, but so it did.

For all of our married years, it was mutually understood that R was the one who knew the difference between a 401K and an IRA, between a variable interest rate and whatever the other kind is. The fact that he received a regular paycheck, while my income as a freelancer was unpredictable, followed suit.

Hence, being forced to discuss matters financial for two hours in the mediator’s office is not my idea of fun. During the last session, I spaced out as the mediator tapped frantically on her calculator and R scribbled feverishly on a pad. At one point, my gaze wandered to the solid metal paperweight shaped like a bunny on the little table next to me. I wondered what sound it would make if I threw it at the side of R’s head. (Yes, even we amicable couples have our moments.)

My bunny-paperweight-tossing fantasy was interrupted when the mediator asked me if I understood what we were talking about. I, too ashamed and polite to say, “NO, I have no f**king idea what the word equity means,” cheerfully responded: “Yes. Yep. Absolutely.” I felt as dumb as Jeannie (as in” I Dream of”).

But, hold on, here comes the optimism: This week, I start my full-time job. Even though I am well aware that cubicle life is not everyone’s idea of joy, and even though “single working mom” is not the label I’d pictured for myself, the thought of earning my own regular paycheck is empowering, relieving and kind of cool.

Soon, I plan to be a financially savvy force to be reckoned with.

(BTW, if you think you can describe the sound a metal bunny paperweight makes when it hits the head of a middle-aged man, by all means let me know.)

One response to “LIVING IN SPLITSVILLE: Farewell Blissful Ignorance of Money”