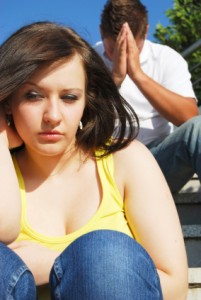 “TEENS REVEAL THE SHOCKING TRUTH TO THE DOCTORS ABOUT TEEN SEX” shouts the email promoting the Feb. 22, 2010 episode of The Doctors on CBS. Shocking? That teens have sex? What’s really shocking is that CBS didn’t simply shout, “WHY WON’T TEEN GIRLS JUST SAY NO?”

The email blast for the episode starts with a quote from Dr. Lisa Masterson, who says, “We need to start talking to teens earlier, so when they are 15 and 16, they are not in my office with an STD that could take away their fertility for the rest of their lives.” Masterson is an OB/GYN, so clearly, when she talks about teens, she’s only talking about female patients. And this isn’t an episode about sexually active teen lesbians, so where is the concern about sexually active male teens? Oh, right. Boys will be boys.

Monday’s episode will include a chat with teens and their mothers. No males were mentioned in the promotional email, although an inquiry to the producers determined that young men will be participating. Still, the promo only sensationalized the females we’ll hear from :
• Jackie, 15, who has had oral sex with about 6 guys, but claims to be a virgin
• Brooke, 16, who is sexually active but doesn’t use condoms
• Jazzi, 16 , who lost her virginity at age13 and doesn’t know about the HPV virus

My assumption, given the tone of the promotional piece, is that these teens young women will be held up as examples of what not to do. They may not be branded with a big letter “P” on their foreheads for being promiscuous, but that’ll be the message. At some point, they and their mothers may cry, and after hearing the doctors lecture on the risks of unprotected sex and STIs, the teens young women will promise to behave differently. Problem solved.

Except it won’t be. Teens, both male and female, will continue to be sexually active, and they will continue to have unprotected sex much of the time. Having teens disclose their sexual histories on TV is is akin to putting them in stocks on the public square for the public to spit on and laugh at. What are the odds that any sexually active teen will watch the show and be eager to chat with mom or dad about safe sex?

And then there’s the age-old problem of blaming females for being so darn tantalizing. If only these young ladies would keep their skirts long and their legs closed, everything would be fine, right? If this weren’t the primary message, teen males’ sensationalized behavior would have been in the promo, too.

Parents, it’s time to step up to the plate. Don’t let TV medical shows — or anyone else — shame your daughters for being sexually active. Talk to them calmly about their choices and how they can protect themselves emotionally and physically from now on. Teach your sons to respect young women, and teach that both partners must be responsible for contraception if they consent to be physically intimate.

Are teens generally healthier if they wait to have sex until they are mature and in a monogamous relationship? Yes, mainly because the odds are greater that they will have fewer lifetime partners and they will use contraceptives to prevent pregnancy and sexually transmitted infections. It is important to share that information with your teens. But once teens have sex, and about half of them will, by the end of high school, your message has to change. Make it easy for your teen to see a health care provider to be tested for STIs and to discuss contraceptive options. If you aren’t comfortable providing condoms for both sons and daughters to carry, then make sure they have the income to buy them on their own. And periodically, check in with your teen to see if he or she is enjoying safe, consenting relationships.

Let’s stop wasting time being shocked that teens have sex. Instead, let’s help them make choices about relationships and behavior that will help them grow into happy, healthy young adults.

One response to “BUZZ ON THE BIRDS AND BEES: Teen Girls + Sex = Shocking?”