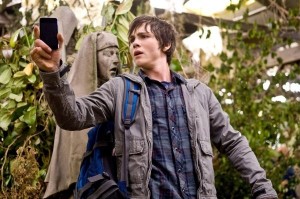 SYNOPSIS: Percy Jackson is just like any other iPod-wearing teenager, until he discovers that he’s the descendant of a Greek god. Not only that, he’s accused of stealing a precious lightning bolt, and the gods are not happy. He and his friends set out on a cross-country adventure to set things right again.

Sex/Nudity: Grover loves the ladies and finds himself surrounded by Vegas girls in one scene. Percy’s mom has a slacker husband who treats her disrespectfully and slaps her behind. A provocative female god kisses Hades, and then eyes Grover, saying, “I haven’t had a satyr … visit before.”

Violence/Gore: Some of the battles and creatures might be frightening for kids under the age of 12. They include a fierce Hades with skeletal wings that rises from a campfire and threatens kids; a giant minotaur that overturns a car; a hydra with several fire-breathing heads; and a snake-haired Medusa who turns other beings to stone when they look at her. Lots of sword fighting, fight scenes, and two characters (one human, one monster) are impaled. Some blood is shown; Percy magically heals in water (and helps others heal).

Profanity: “Percy’s stepfather insults Percy and his mom; AC/DC’s “Highway to Hell” plays on the car radio as the characters head out on their adventure.

Will Parents Like It? The special effects are good and the story is entertaining, but it’s probably too intense for most of the 9- to 10-year-olds who’ve read the books in school.

REVIEW: Percy Jackson is just like any other normal, iPod-wearing teenager who’s not that into school and is especially bored when the class visits a museum to study the Greek gods. But when his teacher says she wants to talk to him alone and takes him into a vacant room, she suddenly morphs into a frightening flying demon, accusing the boy of stealing Zeus’ lightning rod – and she wants it back!

Of course, Percy knows nothing about the rod and thinks he’s probably starting to lose his mind. But he soon realizes that it’s all real, and another teacher in a wheelchair, Mr. Brunner (Pierce Brosnan) is actually a Centaur – half horse, half human. Percy’s buddy, Grover (Brandon T. Jackson), is a satyr – half goat, half human, as well as Percy’s “protector.”

It seems that Percy is actually the son of the sea king Poseidon, who arrived on earth and fell in love with Percy’s human mother Sally (Catherine Keener). That explains Percy’s ability to stay underwater for long periods of time. But as gods are forbidden to have anything to do with their half-human offspring, Poseidon had to leave, and Sally hooked up with a loser husband who orders her around and disrespects her. But we eventually learn why she puts up with it.

So Percy ends up in a camp for half-bloods, along with other demi-gods (half human, half something else), all training to fight and strategize. Since Percy’s been accused of stealing Zeus’ lightning bolt, he embarks on a cross-country adventure that ends in the depths of hell to get to the bottom of it. Along to help are Grover and another fierce fighter demi-god, Annabeth, the daughter of Athena.

The special effects are pretty good, with lots of fierce creatures like a giant minotaur, a hydra with several fire-breathing heads, and a creepy Medusa (Uma Thurman) sporting a head of snakes for hair. Still, I’m guessing that the average age for readers of the book by Rick Riordan is probably nine or ten years old, and this movie might be a little scary for that age.

Also, Percy and his friends have to find three special pearls to help them get out of the underworld alive. They end up at a casino in Vegas, where they eat lotus flowers that have a hallucinogenic effect. The flowers basically lure them into staying at the casino and participating in gambling and, for Grover, women. None of this seems appropriate for kids in the nine to ten age range, and the rating is edging towards a PG-13.

While some of the dialogue is a bit corny, it’s a not-bad movie for kids 12 and older.

Jane Louise Boursaw is a freelance journalist specializing in the movie and television industries. Visit her online at FilmGecko.com , ReelLifewithJane.comor email jboursaw@charter.net.