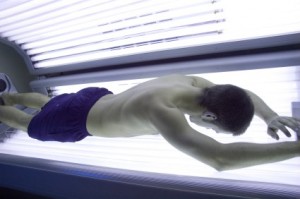 Teen boys are more likely to use tanning booths, take diet pills and have their bodies waxed — even if they think those activities are unhealthy — if they are influenced by their peers, according to a Baylor University researcher.

The research also showed that boys ages 12 to 17 focused more on how their skin appears to others — tone, texture and color — than on other aspects of their appearance, including body shape, when they were influenced by peers, says researcher Jay Yoo, Ph.D.

The study will be published later this year in Adolescence, a quarterly international journal. Yoo studied 155 boys, with an average age of 14.3 years, in seven schools in the eastern U.S.

“I studied what kids are teased about,” Yoo says. “If anyone looks different, people tease you. Probably boys who have acne would become really self-conscious. There are cultural differences, but smooth skin is highly desired, and that may translate into other parts of the body.

Tanning as a fashion trend is a relatively new phenomenon, notes Yoo. While tanned skin once was associated with being blue-collar, “a tan now is considered a sign of the leisure class,” he says. “As a result, the incident of skin cancers has risen dramatically over the past century.”

Also, the availability of over-the-counter diet pills and the advertising world’s presentation of those products may make adolescents think taking them is the norm, Yoo says. Taking diet pills is merely considered, by some teen boys, as a means to achieve slimness, he explains.

Yoo says the number of teen boys receiving spa services, such as hair removal, has nearly doubled since the early 1990s. Nearly half of the almost 14,000 spas in the U.S. offer events and packages for teen boys, he notes.

“Boys used to use what was available in the bathroom cabinet,“ Yoo says. But now it’s aromatherapy and salon products, in which brand image as well as specific information are highlighted for adolescent consumers. “I’ve heard a mother complaining about her son being teased in the locker room when he used to carry products that were not popular among his age group,” he adds.

Here are some of Yoo’s findings about adolescent boys’ perceptions of what is unhealthy behavior vs. their participation in those behaviors:

Kathy Sena is an award-winning health and parenting writer and the mother of a 14-year-old son. Visit her website at kathysena.com and check out her blog, Parent Talk Today.