REEL LIFE WITH JANE: Should You Take the Kids to See "The Tooth Fairy"? 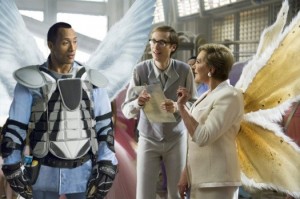 SYNOPSIS: A mean minor-league hockey player (Dwayne “The Rock” Johnson) is best known for knocking the teeth out of his opponents (thus the nickname) and crushing kids’ dreams. Imagine his surprise when he’s sentenced to serve two weeks as a real tooth fairy.

Sex/Nudity: An unmarried couple share a few kisses, and it appears that they spend the night at each others’ homes. A locker-room scene shows shirtless hockey players.

Violence/Gore: Lots of action in the hockey rink, including falls, chases and one scene where the rink glass is shattered and a tooth flies out of a player’s mouth.

Profanity: Some insults, including “emo boy,” “old man,” and “shut up.”

Which Kids Will Like It? Kids seven and older who like cute family movies, “The Rock” or movies with a sports theme.

Will Parents Like It? Yes, it’s a cute family movie with a good message about the importance of dreams (and grownups not crushing those dreams!).

REVIEW: As mentioned in last week’s review of “The Spy Next Door,” there’s really only so much you can do with a kid’s movie. The plot usually revolves around an adult dealing with bratty or apathetic kids, and all is eventually resolved in the end.

“The Tooth Fairy” follows that formula, but what makes it work is the players (it doesn’t get much better than Julie Andrews, Billy Crystal and Seth MacFarlane), and the quality of the production, which is pretty good in this instance. You can tell the filmmakers put some thought into the story, the characters and the music, and it all comes together in a nice family movie that makes you laugh and is good for both kids and adults.

Meanwhile, Derek — known as “the tooth fairy” because of his penchant for taking out opponents’ teeth during hockey games – is having some troubles off the rink, as well. His girlfriend Carly (Ashley Judd) has two kids who aren’t warming up to Derek at all. It doesn’t help that he’s known for crushing kids’ dreams, telling them to lower their expectations when it comes to dreaming big.

After one particularly dream-crushing moment after a game (a kid wants to grow up to be “just like Derek” and he tells the kid it’s probably not going to happen), Derek gets a summons from the official tooth fairy department. Yes, there’s a place where all the tooth fairies learn their craft, helmed by Julie Andrews (complete with wings!). When Derek is dropped unceremoniously into the place, he finds that he’s sprouted wings and is wearing a pink tutu (that’s a technical glitch – he eventually ends up with a smashing blue outfit).

The scene-stealers in this movie are his trainer, Tracy (British actor Stephen Merchant) — who’d really like to be a tooth fairy himself — and an aging fairy played by Billy Crystal who issues all the tools and gadgets a la “Q” in James Bond. Oh, and Seth MacFarlane (“Family Guy”) pops up, too.

You can see where this is headed. Derek gets a wake-up call regarding the importance of dreams and has to figure out how to connect with his girlfriend’s kids Randy and Tess (Chase Ellison and Destiny Grace Whitlock). Randy is supposed to play his electric guitar in the school talent show but is sorely lacking in confidence, so Derek helps him practice by playing his drums with him.

I wouldn’t say this is the best family movie I’ve ever seen, but there are some pretty funny parts, like when Derek bumbles his way through learning how to be a tooth fairy, which involves stalking cats, kids who wake up, and freaked-out parents unaware of the whole tooth fairy business. He finally dons some hockey gear and decides to do it “his way,” and then things get really funny.

As mentioned, Billy Crystal and Stephen Merchant get some of the best lines, especially when Billy’s character is teaching Derek about amnesia powder (“Never gets old!”). Other gadgets include a wand with all-purpose magic generator button, shrinking paste, dog bark mints, cat-away, and invisibility spray.

All in all, this is a fun family movie that will make you laugh, and that contains very few questionable things for kids. It’s implied that Derek and Carly spend nights together sometimes, but it’s never shown beyond the fact that she kicks him out one night for being a dolt. Other than that, the PG rating is on target.