LIVING IN SPLITSVILLE: Divorce Broke My Ex's Back 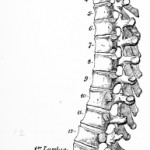 A study published last August found that people who divorce experience a decline in physical health after their marriage ends.

I guess that explains why, shortly after R and I separated, both of our backs broke.

No, they didn’t really break–you know how I like to exaggerate–but they caused us some serious agony for several months post-split.

It was the girls’ first or second solo weekend with R. The phone rang at 8 am on a Sunday morning, the first one in over a decade where I was actually asleep at that time.

She: “He woke up with his leg numb and his back in so much pain that he had to crawl to the bathroom.”

Me, terribly concerned yet trying not to burst out laughing at the image of my poor ex dragging himself across the floor of his crappy sublet: “Oh my god. That’s terrible! Sweetie, here’s what to do: Go into the bathroom, where Daddy is presumably lying on the floor. Shout the word KARMA at him over and over. And don’t forget to point out the metaphor here–how he tried to run away, but, guess what? He can’t! His legs won’t let him.”

Of course that’s not what I really said. Sometimes it’s just more fun to play the part of a nasty, bitter ex-wife because I get to write better lines.

After an emergency Sunday house call from the chiropractor and a few months of physical therapy, R recovered the use of his legs. Around the same time that he was hobbled, my back decided to be a copycat and give me the finger. I was not reduced to crawling (I must have better karma), but I was often in so much pain that I’d break out in a cold sweat.

Whenever I sought a healer for my pain–chiropractor, masseuse, yoga teacher–they’d ask me the usual questions: Had I lifted something heavy, or been in an accident, or was my mattress too soft? When I answered “no” to those, they’d ask: “Is anything significant happening in your life?”

“You mean like the recent ending of my 16-year marriage?”

“Ohhhh, that’s what’s going on,” they’d say knowingly. (Healers just love to find a non-physical explanation for physical pain. Have you noticed that?)

I tend to be skeptical, but I believe that in this case, my back pain was indeed a manifestation of emotional pain; for one thing, it went away as suddenly and mysteriously as it came on.

What do you think?