Browse: Home / 2009 / December / 30 / REEL LIFE WITH JANE: Should the Kids See Alvin and the Chipmunks: The Squeakquel?
Tweet Pin It

REEL LIFE WITH JANE: Should the Kids See Alvin and the Chipmunks: The Squeakquel? 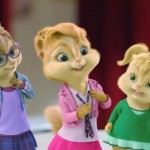 SYNOPSIS:Now in the care of Dave Seville’s nephew Toby (Zachary Levi), Alvin, Simon and Theodore take a break from pop-music stardom and return to school, where they meet the Chipettes, a female chipmunk singing group.

Sex/Nudity:The Chipettes include suggestive hip movements in their act. Boy and girl chipmunks flirt and have crushes on each other. Toby and a former schoolmate like each other.

Violence/Gore:Some scary scenes when Theodore develops a fear of eagles and runs into a real one (but he overcomes the fear). Some bullying at school, including a toilet “swirly” scene. A greedy talent agent locks the Chipettes in a cage, but all is resolved in the end.

Profanity: One use of “junk in the trunk,” as well as words like “butt” and “big jerk.”

Which Kids Will Like It? Kids six and older who liked the first Chipmunk movie or CG animated movies.

Will Parents Like It? Yes, other than the suggestive dances in the Chipettes’ act, it’s a cute movie and all of the issues are resolved in the end.

Meanwhile, the nefarious talent agent from the first movie, Ian (David Cross), returns and takes the new Chipettes (Amy Poehler, Anna Faris and Christina Applegate) under his wing. Only his intentions are mainly to make money for himself. And things don’t go well when the Chipmunks and the Chipettes find themselves competing against each other in a school singing competition, in order to save the school’s music program.

This movie is cute and entertaining, especially the musical numbers, which include a take-off on Beyonce’s “Single Ladies.” The songs are fun, the characters are likeable (except for Ian), and all of the issues involving the chipmunks and humans are resolved in the end. Zachary Levi is a great addition to the fold, and I can see more Chipmunk movies being made.

Sometimes it’s nice to have a fun movie you don’t have to think about, one that both kids and adults can just sit back and enjoy in all its silliness. And the chipmunks are just adorable.

Jane Louise Boursaw is a freelance journalist specializing in the movie and television industries. Visit her online at FilmGecko.com or ReelLifeWithJane.com or email jboursaw@charter.net.

2 responses to “REEL LIFE WITH JANE: Should the Kids See Alvin and the Chipmunks: The Squeakquel?”