YOU'D BE SO PRETTY IF…: Is Barbie Bad for Your Daughter? 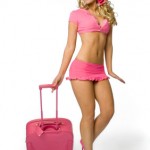 Last spring, Mattel’s Barbie doll turned 50, and you know what that means…the Internet was abuzz this year with stories about all the ways that Barbie causes low self-esteem and body image issues in girls and women.

I’ll admit that while I played with Barbie dolls for a short time during my childhood, I was way more into my Sunshine Family dollhouse — that groovy, happy family of hippies — than I was into Barbie and all her associated glamour. In fact, my mother was none too pleased with me when I sold all of my Barbies and their “stuff” — including a big pink plastic bus — to a friend who lived a few streets over. My asking price? A few dollars.

Back to the issue of Barbie and whether she’s harmful to the female body image. Here’s my not-too-exciting answer: Maybe. You all know by now that I’m a common-sense kind of gal; if you’ve got a little girl who plays with Barbie non-stop and has begun talking about how she wants to look like Barbie, then maybe you’ve got a budding problem. But a little girl who plays with a doll and then puts the doll away to go out and run around with a soccer ball? Not so much.

The key, I think, is talking and as my kids will attest, I will talk and talk until I’m sure they hear me. You certainly don’t have to launch into a discourse about cultural implications and society’s oppression of women with a five-year-old. However, it’s not entirely inappropriate to bring these topics up subtly in an age-appropriate way.

For example, sitting down to play Barbies with a three-year-old might involve a discussion of what Barbie’s going to have for lunch — just as a reminder that healthy women do, in fact, eat. An older girl might enjoy a simple discussion about toy design that could start with the question, “If you were going to make a doll for other girls to play with, what would she look like?” The great thing about interacting with kids is that there are many ways to open the door to these topics…you just have to let their answers be your guide.

I get asked a lot about media images and their effect on body image, and it’s a topic I address in my book. My mantra is that all of these images — Barbie included — have the potential to be harmful if girls are left alone with them. What girls need most from us isn’t heavy-handed declarations; instead, they need context. They need to know that Barbie represents one team of toy designers’ 50-year-old thoughts about women and beauty. If you and I were both asked to paint a beautiful sunset, our pictures might have some of the same elements, but they wouldn’t look the same. It’s all about perception and interpretation.

Girls can get that concept…but they need moms to guide them. So the next time your daughter brings out the Barbie dolls, get down on the floor and play with her. It’s a window into her world and a great way to subtly shape how she sees herself and her place in the world.

Posted in Linger, You'd Be So Pretty If... | Tagged barbie, body image, Dara Chadwick, girls, self esteem, so pretty if | 1 Response

One response to “YOU'D BE SO PRETTY IF…: Is Barbie Bad for Your Daughter?”