REEL LIFE WITH JANE: Should You Take the Kids to See "Avatar"? 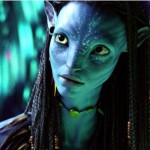 SYNOPSIS: Humans have destroyed the earth’s resources and are forced to mine minerals from other planets, such as the Utopian Pandora. But first they have to remove the peaceful Na’vi tribe from their sacred land, which they attempt to do by downloading humans’ brains into Na’vi-like “avatars” and infiltrating their tribe.

Sex/Nudity: Longing looks between Jake and Neytiri, which eventually leads to kissing and “mating” (but nothing is shown on screen). Also, the Na’vi are sensual creatures with little clothing (though all the private parts are covered up).

Violence/Gore. Characters are injured and die due to battle explosions, gunfire, arrows, and falls. Pandora has fierce creatures that resemble wolves and dragons. Massive robotic bulldozers blaze through the Pandorans sacred lands, scattering creatures and Na’vi and mowing down all the vegetation.

Will Parents Like It? “Avatar” includes several overt messages about government corruption and human’s misuse of the environment, as well as a message about protecting the earth’s resources.

REVIEW: “Avatar” isn’t a movie you go see. It’s a move you absorb and sink into and let surround you. I know that sounds cheesy, but it’s true. I admit the plot is a little predictable. You can see things coming long before they happen, but the 3D special effects more than make up for it.

The story takes place in the year 2154 and revolves around a paraplegic Marine named Jake Sully (Sam Worthington). When his brother is killed in battle, Jake decides to take his place in a mission on the distant Utopian planet of Pandora.

Humans have ravaged the earth’s resources and environment, and are thus dependant on mining the minerals from other planets. Pandora has rich reserves of the mineral unobtainium, which the earth desperately needs. So the government and military have dispatched troops to move the peaceful Na’vi off their sacred lands on Pandora so they can mine the minerals beneath their lands. The political and environmental messages are rampant in this film.

On Pandora, Jake meets the greedy corporate suit Parker Selfridge (Giovanni Ribisi), who will stop at nothing to get that mineral. He’s got the military on his side, led by the war-hungry Col. Miles Quaritch (Stephen Lang). One of the reasons I couldn’t give this movie five out of five reels is because the characters are so one-dimensional. But again, the special effects are well worth a trip to the theater.

It’s in 3D, which I don’t normally appreciate in movies. The whole thing about wearing the special glasses is just annoying to me, and most movies don’t benefit from the 3D effects. But I can’t say that about “Avatar.” It’s one of those rare movies where the 3D actually adds to the movie, instead of detracts from it. You forget you’re wearing the glasses after a while.

The landscape of Pandora is a visual delight, featuring gorgeous plant life of every color, gentle floating creatures that resemble jellyfish, and lush vegetation not unlike a rainforest. It’s Utopia at its best.

Pandora is also home to the peaceful Na’vi, a race of blue humanoids who live in harmony with nature and have a deep connection not only to the land, but also all of their ancestors who’ve died. In this way, they can venture out into the land and see, feel and act like the real Na’vi, while their human body is wired up in a trance-like state back inside a building (humans cannot breathe the Pandoran air).

All this is a real bonus for Jake, who loves having the use of his legs again — though they’re not his real legs. Col. Quaritch promises him a spinal surgery that will restore his real legs, but first Jake has to infiltrate the Na’vi, learn their secrets, and see what it will take to get them to move off their sacred lands. Pretty soon, though, Jake starts to like their ways and starts to fall for one Na’vi, in particular, named Neytiri (Zoe Saldana). He finds himself caught in the middle of two worlds, and the Na’vi world is becoming increasingly more desirable.

As mentioned, “Avatar” is really quite predictable, but it’s definitely worth seeing. For one thing, everyone will be talking about it and you don’t want to miss out on the conversational aspect of it. But it’s also a great fantasy movie that envelops you with its visuals. But because of the intense content involving war and other themes, I don’t recommend it for kids younger than 13.

One response to “REEL LIFE WITH JANE: Should You Take the Kids to See "Avatar"?”